What is DIPG? Diffuse intrinsic pontine glioma (DIPG) is a brain tumor found in a part of the brain stem called the pons. The pons controls essential bodily functions such as heartbeat, breathing, swallowing, eye movement, eyesight, and balance. 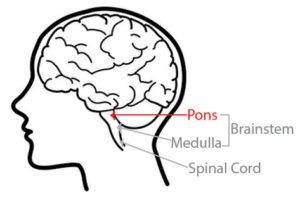 DIPG affects children almost exclusively. Approximately 200-400 children in the United States are diagnosed with DIPG each year. These children are typically between the ages of 4 and 11. DIPG accounts for roughly 10-15% of all brain tumors in children.

DIPG is an aggressive tumor that interferes with all bodily functions, depriving a child of the ability to move, to communicate, and even to eat and drink.

As a DIPG tumor begins to grow, it puts pressure on the nerves that control the essential bodily functions regulated by the pons. Children with DIPG commonly experience double vision, reduced eye movement, facial weakness or asymmetry, and arm and leg weakness. They also have problems with walking, coordination, speech, chewing, and swallowing. As the tumor progresses, it also interferes with breathing and heartbeat, which ultimately results in the child’s death.